Science, Technology and Innovation Policies for Development in India:

Some Reflections on Post-Independence Era 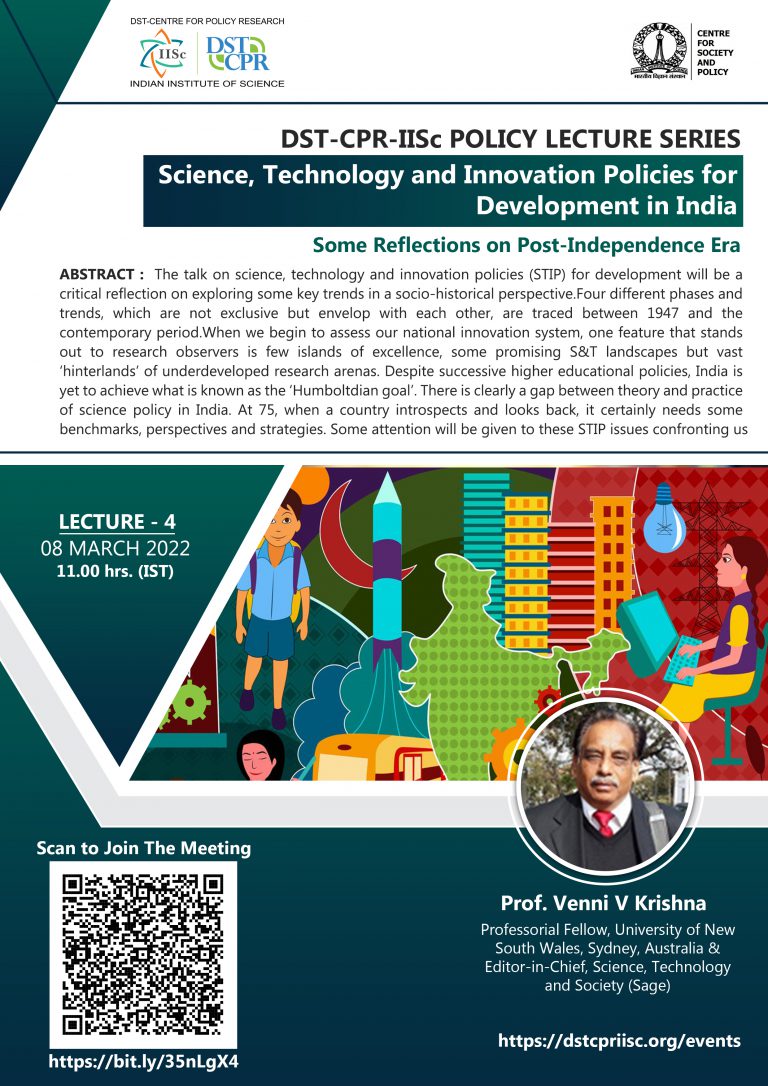 The talk on science, technology and innovation policies (STIP) for development will be a critical reflection on exploring some key trends in a socio-historical perspective. Four different phases and trends, which are not exclusive but envelop with each other, are traced between 1947 and the contemporary period. Science and technology (S&T) policy in the formative years left a distinct Nehruvian imprint in the post-colonial and post-independent India. With a huge population, India is not dependent on food on outside countries since the 1960s. Green and White Revolutions have made immense contribution to develop scientific and technical capacities in agriculture security and related fields of research. India’s innovation system, including higher education, has given her some comparative advantage through ‘human capital’ in information technology, biotechnology, pharmaceuticals, space research and so on.

However, in export promotion and economic competitiveness in technology-based industries, we lag behind East Asian ‘Dragons’. India’s informal sector coupled with 650 plus industrial clusters poses a formidable challenge in skills and technological up gradation with more than 95% of India’s labour force. When we begin to assess our national innovation system, one feature that stands out to research observers is few islands of excellence, some promising S&T landscapes but vast ‘hinterlands’ of underdeveloped research arenas. Despite successive higher educational policies, India is yet to achieve what is known as the ‘Humboltdian goal’. There is clearly a gap between theory and practice of science policy in India. Our gross expenditure on research and development as a proportion of gross domestic product remained relatively stagnant in the last couple of decades and, in fact, receded from 0.8% in the 1990s to 0.7% in 2020. At 75, when a country introspects and looks back, it certainly needs some benchmarks, perspectives and strategies. Some attention will be given to these STIP issues confronting us.

Over the years, he published over 40 papers and five books which include: Science, Technology and Diffusion of Knowledge: Innovation Systems in Asia-Pacific (Edward Elgar 2007); Scientific Communities in the Developing Countries, (Sage 1997). His latest book is on Chinese Universities in the National Innovation Systems (2021) co-authored with three Chinese scholars. Earlier to that he published, Universities in the National Innovation Systems: Experiences from Asia Pacific (Routledge 2017) He is Editor-in-Chief of a ranked international journal Science, Technology and Society (Sage). He was member of various expert committees and been consultant at UNESCO, OECD, ILO and other international agencies. He contributed to World Science Report 1998 and UNESCO Science Report 2005, and to the ILO in 2001 for its programme on the informal sector. He served as expert on European Research Council’s Grand Challenges and European Union, Brussels, based networks on research and innovation policies since the 1990s.