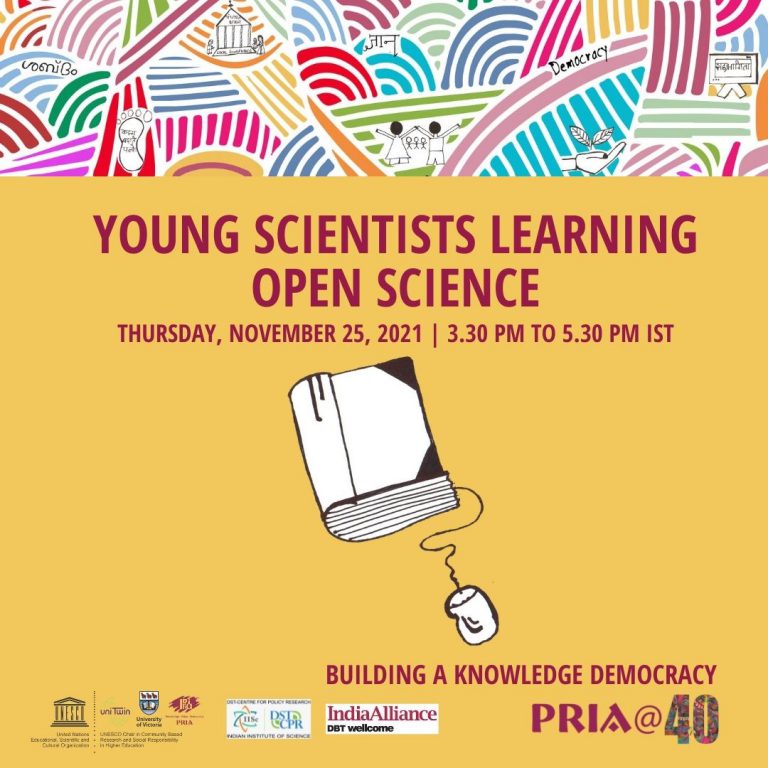 DST-CPR-IISc is happy to invite you for a digital conversation on “Young Scientists Learning Open Science”. This event is jointly organised by the Participatory Research in Asia (PRIA), DST Centre for Policy Research, Indian Institute of Science, Bengaluru, the UNESCO Chair in Community-Based Research and Social Responsibility in Higher Education, and DBT/Wellcome Trust India Alliance to discuss the implications of the UNESCO Recommendation on Science and Scientific Researchers, the UNESCO Recommendation on Open Science, Science with & for society, and the Government of India’s STI Policy, with the special focus on:

4. Inclusion of multiple epistemologies and experiential knowledge in scientific research

The pandemic for the past two years has brought the roles of science, scientists, and scientific research institutions into public debate. It has created a context where connections between science and society are needed to be anchored on a new framework of openness and mutuality.

As the policy brief of Open Science Beyond Open Access observes “There are three main dimensions of scientific openness: openness to publications and data, openness to society, and openness to excluded knowledge and epistemologies.” The final draft of the UNESCO Open Science Recommendation, which also incorporates these expanded meanings of ‘open science’, has now been adopted by the Member States this month in Paris. Similar ideas are adopted in the final draft of the 5th National Science, Technology, and Innovation (STI) Policy of the Government of India. The Scientific Social Responsibility (SSR) policy of the Department of Science and Technology (DST), Government of India, already makes mention of the need for engaging with diverse stakeholders to improve the impacts of science on society.

Likewise, the UNESCO Recommendation on Science and Scientific Researchers adopted in 2017 has particular value today, especially in the Global South, in recognising the role of science in promoting “common good” and in emphasising the use of results of scientific research and development with a spirit of responsibility towards humankind and the environment.

Such testimonials create a space for science and technology systems and institutions to change and become more “open”. New conversations among scientists, science communicators, scientific researchers and civil society have begun to emerge as the need for a robust ecosystem to make science work with and for society is becoming more apparent. The experiences of the pandemic have also generated more significant public discourse about the accountability of science to society. In many regions of the world, new ways of promoting public engagement with and for science have been practised through an enabling policy framework. The European Union’s focus on Responsible Research & Innovations (RRI) has integrated several such features. There is now a growing recognition to synergise knowledge production and dissemination on such critical issues as the environment, health and food systems. A large portion of which is being carried out on the ground by a host of civil society actors in the country through community-based participatory research  with the partnerships of academics with local communities.