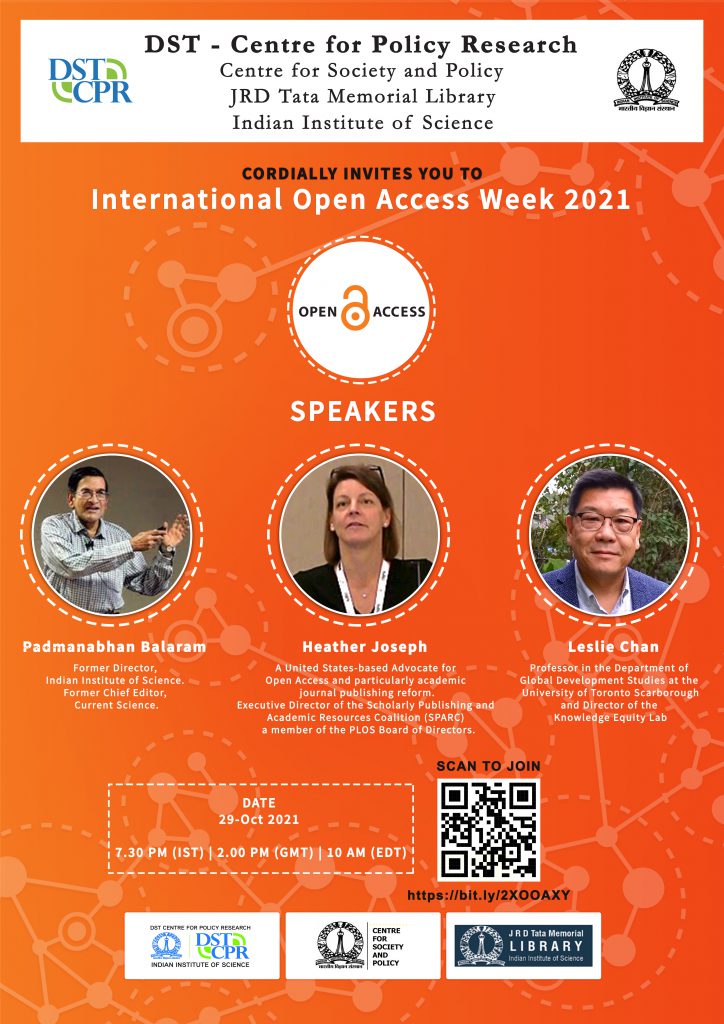 Update: Here’s the the YouTube playlist of this event’s videos.

DST-Centre for Policy Research (CPR), Centre for Society and Policy, Indian Institute of Science and J.R.D. Tata Memorial Library, Indian Institute of Science, invite you to the (online) event to observe and celebrate the International Open Access Week 2021; the session will feature three lectures; see below for details. This year’s OA Week event at IISc is the fifth in a series. It is also special, since it is being held in honour of Prof. Arunachalam, a champion of the open access movement in India, who turned 80 in September 2021. The event theme is in alignment with this year’s OA Week theme: “It Matters How We Open Knowledge: Building Structural Equity.”

Abstract: The Future of the Open Access Movement: The Open Access movement is about to mark its 20th anniversary. At a meeting convened in Budapest by the Open Society Institute in December of 2001, a small but diverse group met to explore ways to accelerate progress in the international effort to make research articles freely available on the internet.  They explored the most effective and affordable strategies for serving the interests of the researchers and the institutions that support research, examined ways to make the transition to open access and economically self-sustaining, and discussed how separate initiatives could best work together to achieve broader success. The result was the Budapest Open Access Initiative (BOAI), which offered the first definition of open access. The BOAI is a statement of principle, a statement of strategy, and a statement of commitment. Two decades later, while much progress has been made, significant work remains to be done. This talk will explore the key challenges facing the Open Access movement and propose areas of concentration to ensure that global research enterprise is one that is truly open by default, and equitable by design.

●      Leslie Chan, Professor, University of Toronto, Scarborough, Canada- On Opening Sciences from Below

Abstract: Mainstream discourses have tended to frame Open Science as a set of neutral standards, tools, and practices to be followed, often with the objective of pursuing utilitarian or market-driven outcomes. This talk reflects on some of these framings and proposes other ways of conceiving open science, considering both the benefits and the potential harms to communities affected by the research. Drawing lessons from OCSDNet and the Open Science and Decolonization of Knowledge project, I outline an inclusive, open science involving a highly dynamic process of negotiating and challenging power relations within highly situated socio-political contexts and involving actors and institutions, and communities with varying claims for knowledge legitimacy. Science policy-making needs to take these power imbalances into account so as not to perpetuate and exacerbate existing inequities.

Padmanabhan Balaram is a renowned Indian scientist and former director of the Indian Institute of Science, Bangalore, India. He is a recipient of the third highest Indian civilian honour of Padma Bhushan (2014) and the TWAS Prize (1994). Recently, Prof. Balaram has been conferred with R. Bruce Merrifield Award (2021) by the American Peptide Society. He has also been the Editor of Current Science from 1995-2013.

Heather Joseph is a United States-based advocate for open access and particularly academic journal publishing reform. She is the Executive Director of the Scholarly Publishing and Academic Resources Coalition (SPARC) and a member of the PLOS Board of Directors. Under her stewardship, SPARC has become widely recognised as the leading international force for effective open access policies and practices. Among her many achievements, she convened the Alliance for Taxpayer Access and the Open Access Working Group, which provided critical advocacy for establishing the landmark, 2008 NIH Public Access Policy and the 2013 White House Memorandum on Public Access to Federally Funded Research. She is the recipient of the Miles Conrad Award-2021 from NISO (National Information Standards Organization).

Leslie Chan is an Associate Professor in the Department of Global Development Studies at the University of Toronto Scarborough and the director of the Knowledge Equity Lab. An early practitioner of the Web for scholarly exchange and online learning, Leslie is particularly interested in the role and design of network in the flow of knowledge and their impact on local and international development. As one of the original signatories of the Budapest Open Access Initiative, Leslie has been active in the experimentation and implementation of scholarly communication initiatives of varying scales around the world. Leslie has also been exploring the dynamics of university-community partnership and the meanings around knowledge co-creation, participatory research, and how community engaged modes of knowledge production could contribute to equitable frameworks of valuing diverse knowledges. Since 2000, Leslie has been serving as the director of Bioline International, an open access platform for scientific journals from the global south. He is on the advisory board of several international organizations, including the San Francisco Declaration on Research Assessment (DORA), Directory of Open Access Journals (DOAJ), and the steering committee of Invest in Open Infrastructure (IOI).