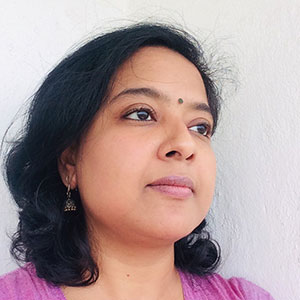 Moumita has completed her Ph.D from the Technical University of Vienna (TU, Vienna), Austria, in 2010. Her area of expertise is in the domain of synthetic organic chemistry and medicinal chemistry. She was the recipient of the best Ph.D thesis award from the TU Vienna (Hannspeter Winter Preis-2011).  She was also awarded Uni:Invent Award from the Austrian Ministry of Science and Research. She continued as a post-doctoral researcher in TU Vienna and Indian Institute of Science (IISc) and investigated problems in the research field of metal and enzyme catalysis.  Moumita then decided to explore teaching and joined the IISc as UG Instructor in chemistry. While teaching in the UG programme at IISc, she became interested in the science policy research areas, such as open science, open source drug design, biofuels etc. Currently she is a post-doctoral researcher at the DST-CPR, IISc.