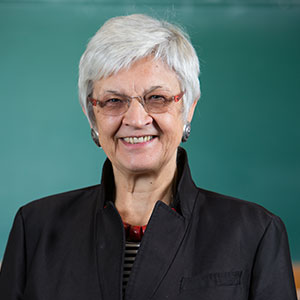 She has served on many national and international review committees and advisory boards, such as the International Advisory Committee for Science and Engineering of NSF (US), the National Academies Panel to evaluate the NSF/NCSES approach to measuring the US Science and Engineering Workforce, the U.S. National Research Council, the German Excellence Initiative, the Presidential Innovation Board of the University of Bremen, Germany, the Graduate Academy of the Goethe University of Frankfurt. She has undertaken evaluation research for flagship interdisciplinary doctoral programs in the U.S. (NSF/IGERT), in Germany, and for the European Commission (ITN). She has written and edited 5 books and published numerous articles on doctoral education (Towards a Global PhD? Globalization and the Impact on the Quality on Doctoral Education).

Most recently she has secured funding and co-organized an international workshop and conference on Forces and Forms in Doctoral Education Worldwide in Difficult Political Times (VW Foundation) in September 1-5, 2019 in Hannover Germany. The resulting book, Towards a Core Value System in Doctoral Education, UCL Press will appear in spring 2022. Resulting policy recommendations are to be found under www.doctoral-education.info.

She publishes with current and former students, advises and coaches on a broad range of issues in doctoral education and in early research careers worldwide and currently is investigating Taboos in Doctoral Education Across Countries.